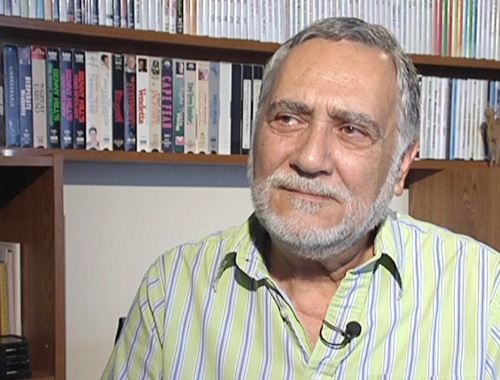 Repatriated from Egypt in 1947 / Currently residing in Glendale (California, USA)

We had a three story house in the Kempchizr neighborhood of Alexandria. My ancestors were pharmacists. My uncle Mihran Yergat lived on one floor, Mari Yergat on the other, and my mother Arpineh Yergat on the third.

In 1947, when we were going to Armenia, my grandmother sold it all, purchased goods with the money, and brought the stuff to Armenia.

If repatriates in Soviet Armenia were praised, it was only verbally. Many weren’t given official posts. They used them as craftsmen, as workers. One person worked and ten others lived off that work. I know this. One person worked on a lathe in the factory and the rest would take a break. This was a result of the communist regime. It was as if you were in a free exile. I’m being a bit crude, but that’s the way it was for the repatriates.

I was never a party member. I’m a musician. I avoided it. To be truthful, I was in the Komsomol as a pupil. But I always avoided becoming a communist, even though I was a department head at the ministry of culture. They called me after the post was vacant for a week and appointed me. However, when I wanted to go abroad as a tourist, they didn’t let me. I had an invitation from my aunt’s daughter in Canada.

Neither did they let me go to Czechoslovakia. There was an international jazz festival that took place every year. I received an invitation in 1967 to participate. I went to the OVIR (Visa Department), I went to the Central Committee, I went to the Committee for Cultural Relations with Foreign Countries. Liloyan, a deputy director, told me to bring this document and that document, and to bring a letter of guarantee. Robert Arzumanyan, then the secretary of the Komsomol, knew me quite well because I would organize important concerts. He immediately issued the guarantee letter for me. So did the Conservatory and my workplace. But when I went to Liloyan he said, “That festival will still take place if you don’t go. Right?” I said yes. He turned around and said it’s too late to go anyway and that I would never make it in time. That’s how he did me wrong.

It wasn’t that hard to leave Armenia in 1989. At the ministry where I worked, everyone was surprised, saying, “Armen where are you going and why?” It was after the earthquake. The Kharabakh movement had already started. They gave me a visa with no problems. We all came to America – me, my wife, my mother-in-law and two of my children.

I have three children, grandkids, and they all love and respect me. But I live here alone now. I dedicated my life to art. Yes, I could play at weddings, but I could never force myself to do so.

I have taught and I write music, songs. If any European country, France for example, would accept me, I’d leave for France. Not because I don’t like America. But Europe is different. This here isn’t Europe.

By the time I learnt the language and understood the laws, before I understood what to be careful of…Now, I don’t own a house because I had a lot of problems. All these years have taken a toll.

Yes, I would like to return to Armenia, but only when the government is normal. When I find out that there is no discrimination and when they do not give a job to someone unqualified instead of someone talented.

I grew up in Yerevan. I’m a Yerevantsi. But I won’t go back until it becomes a country of rules and laws. Until I find out that if a son of a ministry runs someone over in the street will be taken to court and not some innocent average person.

After living in America I finally experienced how a person can live a free life and how to advance one’s principles. In Armenia, we weren’t allowed to respect our principles or do what we wanted.

There was a time when it was good. But later, everything again was turned upside down. At the time of the Karabakh movement, many predicted what would happen after gaining independence; who would govern the country and what would happen. A bloodless revolution took place, right? During a revolution, however, you also get the unruly mob that slowly gathers strength. Only later do they begin to think about intellectual things. That’s what Lenin did. That’s what they are doing today. Independence is a good thing, but who benefited?

If repatriates in Soviet Armenia were praised, it was only verbally.