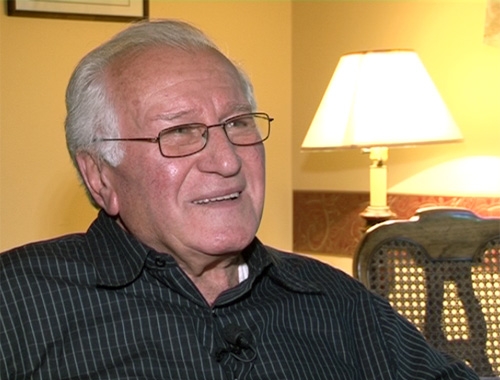 We came from Baghdad in 1947. There was a repatriation the year before as well. There were people in it who had escaped from Armenia and wound up in Iraq. They would say – don’t go. They gave my aunt a piece of black bread they brought back from Armenia. My aunt gave the bread to my mother and said, “Don’t go! Don’t take this child there. Let him go to Egypt where the government will pay for his education.” My mother said, “No, I will take him to the homeland.” And, thank god, I am content that my mother brought me. I’m sincere. It was difficult. But I got here and forged bonds with Armenia. My love is boundless, knowing that there’s Armenia on one part of the world and Yerevan on the other.

We went to Beirut by car and then boarded the ship Pobeda. On the way, the ship docked in Cyprus and picked up other repatriates. We then arrived in Batum. From there, we took a train to Armenia.

They took us to Lori, the village of Tzaghindzor. There were mines there and a factory for fired bricks was to be built there. The war had just ended. Times were very tough. They allocated one space for all us of. My mother started working in the kindergarten. Slowly, we got acclimated.

Repatriation, as a program, was of course incorrect because Armenia wasn’t ready to accept all those people. The situation of people in Armenia was difficult. The economy was in a shambles after the war and suddenly 100,000 people arrive all at once. Their discontent was also understandable – we have no bread and they are bringing in people to our country from overseas.

On the other hand, after the Genocide, especially in Arab countries, Armenians were well accepted. People, more or less, got back on their feet, establishing homes and businesses. They destroyed all that and came to Armenia. They were taken aback when they didn’t see what they wanted.

The exile made things even worse. Everyone was living in fear, waiting to see if they would be taken away as well. I was young. The elders would gather in that village in which we were staying. They would talk and tell me – look outside. No one listened.

I worked as the chief mechanic at the factory. I would argue in the factory. One day, they said, “Hey aghpar, keep quiet and sit down. One day they’ll send someone from the regional committee to fire you. Don’t complain so much.” But I didn’t get angry. I knew that, over time, such differences would vanish. That difference didn’t exist when our kids grew up. I have a friend from Aparan who says that in 1915 locals called them refugees.

There was this popular saying – give an aghpar a bride, but don’t take a bride from an aghpar. It’s because aghpar girls were very demanding. And aghpar boys were very attentive towards their wives. There were even differences among the repatriates. Someone from Greece didn’t want to give a bride to a person from Beirut, or take one…

Today, such tensions exist in Los Angeles, and I always thought, why did I go? In the end, that’s how god wanted it and I returned to Armenia. With the Hayrenik Union we’ve been constructing schools and kindergartens, outfitting them with computers, for the past twenty years.