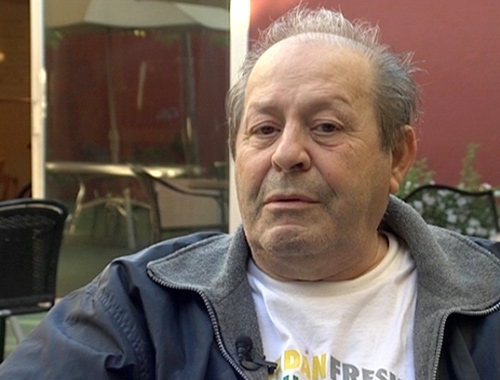 My family was mostly Dashnak. They hanged my father’s uncle in Dikranagerd. My grandfather and grandmother were sacristans in the St. Asdvadzadzin Church. They were preparing candles when they were attacked, knifed, and thrown into the boiling wax cauldron.

My mother was a girl of ten to twelve. The Kurds dressed her and the other Armenian children in their traditional garb and took them from Dikranagerd to Bolis. Patriarch Zaven was my mother’s uncle. He found her work in a military hospital.

Later, when my mother learnt that her father’s brother was in Egypt, she moved there. She didn’t like that country and wanted to return. Her uncle threatened her with a knife, “You won’t go back to those Turks.” So, she was married off to my father. My father was thirteen years older than my mother.

We were four brothers, one sister and mom. My father died in Egypt. We arrived without a father. My mother didn’t want to come to Armenia. My older brother was a soviet thinker. My younger brother, who later worked in the telegraph office, told my mother, “We’ll take your coffin, but you will come to Armenia.”

We arrived in Armenia in September 1947. We lived in a basement on the corner of Prospekt and Ghukasyan in Yerevan. They divided the place up with a wooden partition for two families.

On night of June 13-14, 1949, they came to our basement. I wanted to go to the bathroom. They escorted me with a pistol. And what a bathroom! It was a hole with a wooden hut on top. I came out and they took me. They took entire families. They were taking us towards Ararat. We figured they wanted to chuck us, as excess baggage, across the border.

We finally reached a village near Barnaoul. The official who greeted us was the director of the local forestry enterprise. He told us, “What, do you think you’ve come here to live? They’ve brought you here to perish.” My mother responded, “No, we will not die. We will cut down trees and build a gallows, to hang you.”

My mother was a very active woman. She was a doctor’s assistant. In those hard times, she was helping Armenians with all types of treatment. The first year, they took my two brothers into the depths of the forest. The temperature was minus 55 degrees. Their hands froze. They ran home. My older brother’s hands were rotted. Somehow, my mother treated them. After it all, they took us to court and jailed us for several months. They charged us with sabotage.

They had told my mother and the entire village that they had taken my brother to a sanatorium. My mother went to see him and said, “Hey knucklehead, when your hands were freezing, couldn’t you have told me earlier?” She didn’t know that my brother was in prison, where they chop onions and garlic with an axe.

There were steppes in the middle of the forest. The beams were brought and piled atop one another near the river’s edge. I would use a metal tool to engrave their measurements so that they could be immediately sorted after being removed from the water. The temperature dropped to minus 40. You weren’t allowed to leave your job. When you’re working in that cold, your body sweats, no? You say, let me catch my breath for two minutes. Your entire body turns into frozen iron. One day, I said to my mother, “Mom, what did we do wrong for you, for your five minutes of fun, to bring us here to be tortured for life?”

We were already in the village when we heard that Stalin had died. My mother said, “Beria, born from a snake. You won’t last a month.” And that’s what happened. But we were there for a long time, until 1957. Solzhenitsyn had complied a list of the deported to be freed. They freed them in turns. We were the Frounjians, at the end of the list.

They let me study at the school in Barnaoul. When we came to Yerevan, there was a school near the Silachi Bank. That where I graduated from the tenth grade. I worked in a movie studio and later got a job at the Theatrical Institute. After graduating, I went to Sochi and got to know the director of a television studio. I told him I had graduated and wanted to intern there. I worked at the Sochi studio for five or six years. Afterwards, Rouben Zaryan, a close friend of my mother and sister, brought me to Armenia with him, to the documentary film studio.

My mother had a very sharp tongue. We were allotted a house on the corner of the Baghramyan-Kievyan intersection. My friend, who was in Siberia with us, came and said that the house was big and finagled with the account so as not to show that much electricity usage.

One day, after returning home from the movie studio, there was a man standing by the door. My mother opened the door and shouted, “Hey, are you still standing here? Didn’t we tell you to leave?” It was the electricity man. I told my mother to go inside. She turned to me and said, “We’ve suffered so much from this government that stealing this is still too little.”

In the late 1970s, I received a special invitation, a stamped visa, signed by U.S. Secretary of State Henry Kissinger. My cousin was there in Philadelphia. He was a Dashnak secretary. He invited me. In the Soviet Union, they said that a cousin wasn’t regarded as a close relative. I answered, “If the son of my father’s brother isn’t a close relative, how is it that you deported us because the son of my father’s sister was a Dashnak secretary in Egypt?”

We eventually left Armenia in 1988

Let me say that the repatriation was a deception. It was the plan, excuse me, shit, of a few paid-off communists…

They took entire families. They were taking us towards Ararat. We figured they wanted to chuck us, as excess baggage, across the border.