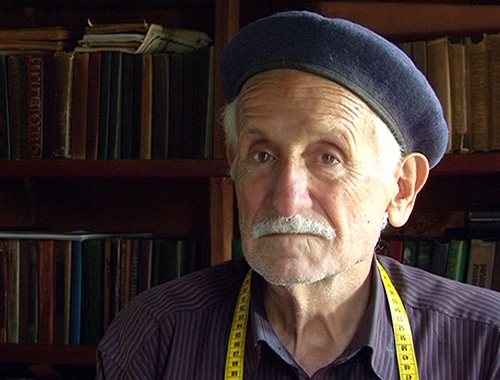 My father fought as a fedayi.* He was an illiterate who couldn’t read a letter, but he knew how to speak Persian, Assyrian, Arabic, Russian, Kurdish and Turkish. He was a tall, strong guy.

We lived in Beirut, six kilometers from the catholicosate. I sang in the church until the age of twelve.

The Antelias Catholicos was Karekin Hovsepian. He helped organize the repatriation to Armenia. He’d make speeches and sermons. When they’d bring a microphone for him to talk into, he refused, stating that, “My people will hear and understand me without a microphone.”

One day, my father said, “I am going, to be buried in Armenia.” We arrived. Going to church was forbidden. But I would attend church. I was working. I belonged to the Communist Youth. Out of the blue, the secretary of the local Communist Party at our workplace scrunched his eyebrows and said that some of the workers here are going to church. The Regional Communist Party secretary demanded their names. My name was given.

Before this, while I was in the seventh grade, I was summoned to the KGB. They asked why my name was Ishkhan? * It wasn’t a fitting name in the Soviet Union. I told the guy who was questioning me, I can’t remember if his name was Bedros or Boghos, so why is your name Boghos? He replied, it’s my grandfather’s name and they gave it to me. I then said, perhaps my grandfather’s name was Ishkhan. What do I know? *[Armenian for prince]

I think it was 1949. We were already living in Kirovakan (Vanadzor) when they started to exile the repatriates. If we had stayed in Leninakan (Gyumri) or Yerevan, they would have surely deported us. Not many people here knew that my father was a fedayi.

My father died in 1969. That illiterate man would advise me not to lie, not to steal. And if someone all of a sudden bought an expensive thing, he advised me, “Don’t say why did you buy it? It was expensive. Instead, say, you bought well. Enjoy it.”

We didn’t leave like the other repatriates. Nor are we sorry we didn’t. What did we know about what would happen to us over there? My wife sometimes gets annoyed. I tell here, “Don’t we get a pension here and make ends meet? Who will give us a pension there? I don’t even know…Are there pensions in Lebanon?

We didn’t leave like the other repatriates. Nor are we sorry we didn’t. What did we know about what would happen to us over there?