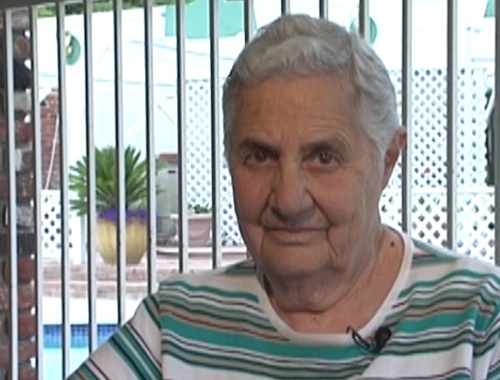 My father always wanted to take his children to Armenia. He was so patriotic, so patriotic…In Chicago, he tried to convince all his friends to participate in the repatriation. He would tell them if they didn’t their children would assimilate and the Armenian people would disappear, I have five girls and I want them all to marry Armenians.

But when the repatriation began in Chicago, my two sisters were working and didn’t want to leave. So, my mother and father, and their three children, me included, left for New York and boarded a Russian ship.

The ship docked once in France and continued on until Batum. We saw that everything was completely different there from what we expected. But my father again told us – my girls, this is Batum, Armenian will be different, will be much better.

We arrived in Yerevan. We were met and taken to prepared apartments for Americans going to the homeland.

My father was a shoemaker. When we left America for Armenia, he took a shoe factory with him. He handed over all the factory’s equipment to a արտելին, for which he was paid fifty thousand rubles.

We lived in Yondjalar, a neighborhood near Yerevan’s Third District. The apartment wasn’t bad, even though there was no water or bathroom. Nevertheless, it was OK. Every week we’d sell our stuff at the black market and lived off the income.

The locals, at first, didn’t accept us that well. They thought we’d come to Yerevan and their bread would decrease. But later, understanding our situation, they pitied us for being deceived by the propaganda. We had left a place like America for Armenia.

Ten months after we immigrated, they came to our house one night and took my father away. They said it would be for a few days to question him. They kept him in prison for a year and then exiled him to Siberia. We received a letter from him in Siberia, saying he had been sentenced to fifteen years as a traitor to the fatherland.

Treason…My younger sister wanted to join the second group leaving America for Armenia. We warned her through letters, saying don’t come, this isn’t your place. They exiled my father for those letters. My father remained in Siberia from 1948 to 1955.

My father was vindicated and when he returned they gave him back the fifty thousand rubles they had taken from him.

After getting married, I stated to give private English lessons to children. Initially, I had many students and our life got much better from the money I made. I other sisters were also giving private English lessons. My older sister, who stayed in America, married a non-Armenian and grew apart from us. My younger sister filed petitions with Washington and many other places so that our family could return to America. In 1966, our family received a visa and left the Soviet Union. My mother had since passed. My father died two months after returning to America.

There were 150 people in our group that left America for Armenia. I can say that more than 100 have returned. That repatriation was a mistake. The country had just come out of a war. It was too early to bring people from America. They should have brought them after conditions had gotten better, so that people wouldn’t get dissatisfied.

When we returned here, we weren’t sorry. We saw many good things that we didn’t see while living in the Soviet Union.

But my father again told us – my girls, this is Batum, Armenian will be different, will be much better.