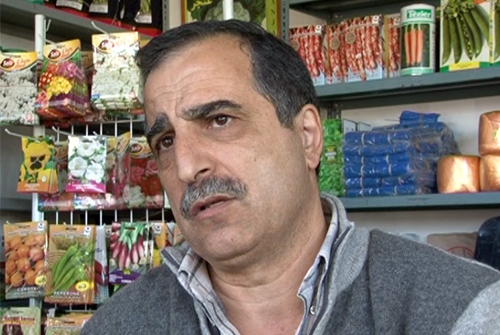 Naturally, I wasn’t alive at the time, but I’ve researched the issue. We Mousa Ler people, arrived in Aynjar in September 1939. 5,125 individuals (1,205 families) reached Aynjar. Thus, not all of them settled in Aynjar. Some went to Saida, in the south of Lebanon, others went to Damascus and Beirut. 1,050 families settled in Aynjar.

By the way, Aynjar was a desert. It looks completely different today. We didn’t plant any trees in the gardens for the first ten years, in the hope that we’d return to Mousa Ler. So, when the repatriation happened in 1946-1947, people were very enthusiastic to immigrate to the homeland since they hadn’t put down roots here.

700 Mousa Ler families repatriated; 650 from Aynjar and 50 from other regions in Lebanon and from Syria. There’s also a song written about the occasion. I don’t know the melody but I remember the words:

So, people recording names arrived, they distributed papers for people to register to immigrate to Armenia. People prepared their luggage and their clothes. They talked and cried and went to Armenia. That’s to say the separation here was quite difficult because there were families that were split; half went and the rest remained.

Collectively, the Mousa Ler folk went to the port and played dhol-zourna music, bidding farewell to those leaving. I believe it was the Rossia ship that took them to Armenia.

Did they have concerns? Yes. There were people who thought that what had been promised by the repatriate agencies didn’t correspond to reality or might not.

I heard that one of the main promoters of the repatriation was Tovmas “Instructor” Habeshian, our former teacher and duty officer of the party committee. Habeshian had also prepared to repatriate, but there were always alert people, everywhere. He had relatives in the first convoy and he told them that when they arrived to write. If the place was bad, they should write the door of the dolab (closet) is broken.

So, Tovmas the Instructor, god rest his soul, said that he had prepared his items when he received a letter from one of his relatives saying that the ‘closet door is broken’. Thus, he said, that he was immediately disappointed and they didn’t go with the second convoy.

There were people who believed that the Soviet Union might persecute them for their political positions and their faith, and, I believe, that these people weren’t mistaken. There were many people amongst the repatriates, either Tashnag or anti-Tashnag, who were persecuted and exiled to Siberia. Some of them died there. I have relatives who were deported to Siberia and they weren’t party members but who supported the ARF.

All the Mousa Ler people of Aynjar have relatives today in Armenia. All the children of my aunt Varsenig Lakisian are in Armenia, residing in the Noragavit neighborhood of Yerevan. I went two weeks ago and visited them all. They are in Noragavit, Avan, Jrvezh, Masif. We haven’t cut the link with them and, fortunately, those relatives of mine never left Armenia.

The repatriation, however, if I think like a person from Aynjar, I’d say that either all the Mousa Ler people should have immigrated or else they all should have stayed, because the immigrants, being small in number, were dispersed throughout Armenia and their customs and dialect is in the process of being lost. Those who stayed, have been weakened, since their numbers dropped a lot.

If the repatriation didn’t happen, Aynjar would look different today and would have a different strength. In other words, we would have this international route. But Aynjar got weakened and the number of people decreased. Houses remained empty. Palestinians came and took their places. Later, they became a problem for the Aynjar people.

On the other hand, repatriation was very important for the homeland because it brought Armenians with an outside experience to the country. And I believe that Armenian profited from the repatriates. They placed their skills and experience at the service of Armenia and that was a plus. The native residents of Armenia shouldn’t get upset. When I look at our artists and writers, the majority were repatriates. This doesn’t take away from the eastern Armenian merits, but we have to speak the reality. Let’s names some names; Chekijian, Hakob Hakobian, which name shall I give? Yervand Kochar.

And what about the difficulties with the locals? If a person living in any country moves to another country to live, they will face many problems. This is common. For example, my daughter has gone to Yerevan, to study at the Komitas music school. The first year was very hard for her in terms of getting used to Yerevan life, because here, we have another mentality, we are villagers. Our customs and way of life are different.

Those who repatriated came from abroad to the homeland. It’s very natural that difficulties arose between them and the locals -  understanding, customs, behavior, language. I, for instance, don’t understand that conversational language you call Yerevan slang. But my daughter understands it by living there. That’s what happened in the case of our relatives who have not forgotten our dialect but who live like native Yerevan residents in all aspects. They have become Yerevantsi.

There were people who thought that what had been promised by the repatriate agencies didn’t correspond to reality or might not.