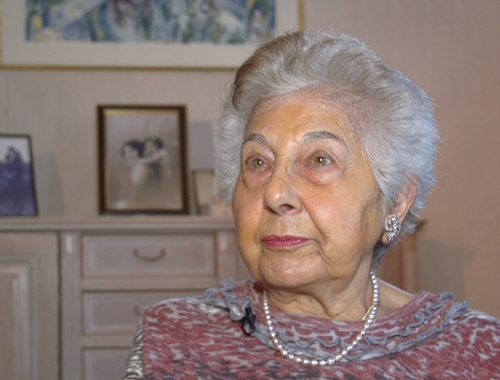 Immigrated from the United States in 1947

A fire broke out on the ship that was taking us. They told us that the repatriation process was over and that we couldn’t go. How could we go back? We had left everything – our house, work, school. Local organizations wrote to Stalin. Finally, they found a way for us to go.

A special ship didn’t come to take us. We went by a regular ship from New York to Naples. From Naples, we boarded a Romanian cargo ship to Batum. It took ten days. My brother was three. My mother was able to have a bed to sleep on the ship. I slept next to them on the floor.

At the age of twelve, they removed my father from school. He learnt tailoring and worked in the trade. But he really loved to attend school and learn. Since he was forced to leave school, he believed that communism was a good thing because all would get an education.

My father had an eye problem. There was a famous eye doctor in Odessa. My father hoped to go to Odessa and get cured. That’s why we went to Armenia.

What did we see? It was February 1947. Our relatives and friends said that it was good now, not like 1947 or 1947. But we didn’t see anything good since we came from America. There were queues everywhere. There was no butter or sugar. If you bought it in the market, it was very expensive.

We Americans numbered around 140 people. They had built us a house in Yerevan – the Americans’ house. They placed a few families there. The rest were placed here and there. We were lucky because there was a three room apartment in one of those houses and they gave us one room along with two other families. We had to use the same kitchen and bathroom.

Other families, of course, built houses. No matter what, we had lived overseas and knew life there. I had lived in America until the age of nineteen. Oh, I cannot forget it.

I don’t know why they organized that repatriation. That issue still confounds me. Thousands went. How could that tiny Armenia accept them all when it was in dire straits itself? A mere two or three weeks had passed since we arrived when they arrested and took away some people in our group. What could they have done in the span of a few days?

In September 1949, I was accepted at the foreign languages’ institute. It was very difficult. I had a girlfriend, also from America. We were close friends. We could hardly read Armenian. The newcomers from Syria, Lebanon and Egypt knew Armenian since they had gone to schools there. Yes, they knew western Armenian but it easy to change over to eastern Armenian. But we didn’t know any Armenian. We were excused from English classes.

It was our last year of learning when Stalin died. The teachers at all our classes would begin by crying. All the students cried as well. Only I and my girlfriend didn’t cry. We had a third girlfriend, from Egypt. She was a bit cleverer than us. She’d say – Cry. Don’t sit. Cry. I’d respond that I couldn’t cry, I had to laugh.

After graduating, they sent us to the villages to work. My mother worked at a sewing atelier. One of her customers was a division chief from the enlightenment ministry. Somehow, that woman has able to free me from working in the villages. I was assigned to Yerevan. Then, there was a vacancy for a French teacher. I said I knew French. I’m still amazed that employed me as a French teacher just on my say so. I taught French for five years, but also gave private English lessons. It was a great help for the family.

I believe the repatriates started leaving Armenia in 1956. The non-Armenians left first. For example, there were Armenian men, and some women, who had married non-Armenians. They let those families leave. Christian Pineau, the French foreign minister, visited the Soviet Union that year. He also came to Yerevan. He was met by thousands of French-Armenians. A French woman gave Pineau her baby and told him to take the baby to France. It was very impressive. The hope of Armenians to leave began there.

The cultures of the newcomers and the locals were quite different. Let me recount a small example. I was nineteen when we went to Armenia. From the beginning, I received many marriage offers. There, a go-between comes and says that the boy of such and such family wants to marry you. But how could I answer yes or no? Even if I saw that person just once? In other words, naturally, I’d always say “no”.
This happened a few times. Then, my father told me, “You know, don’t say no. I’m a liberal-minded man. Go out on a date with him, get acquainted, and then decide.” I couldn’t. That’s not the way it was in America. There, boys and girls go out together. Only later is marriage a possibility. If everything goes smoothly, perhaps they’ll marry. I didn’t get married. I had obligations toward the family. My father’s vision had gone and he later died. I was the family rudder. My mother was in poor health. My brother was much younger than I.

We needed a letter from the workplace as part of the documents to leave. The Stalinist era had ended. Times were free. When the director of the Charents School signed the letter, he looked at me and smiled. He wished me well. They understood why we wanted to leave and didn’t conceal it.

Yes, my father’s sisters were in America and I wanted to go there. After my father died, it was no longer possible. My mother had two brothers in France. One of them sent us an invitation and that’s how we went. I had planned to go to America from France. I wound up staying here.

Our relatives and friends said that it was good now, not like 1947 or 1947. But we didn’t see anything good since we came from America.